Dogz is the first game in the Petz series, originally released as a standalone title in 1995.[1] Unlike its successors, it offers no integration with its sister title Catz, which was not released until the following year.[2]

In 1999, Dogz was ported to the Game Boy Color to negative reception.

The player starts off at the Adoption Play Area. The Adoption Play Area consists of 5 doghouses, each containing a dog. The player is only allowed to have one dog at a time; if they want to adopt another dog, they have to return the dog they already have or buy another copy of the game. No two pets could be taken out at the same time until Petz II.

Each evolves into a separate, more standard breed in Petz II and beyond: Great Dane, Chihuahua, Scottie, Bulldog, and Mutt, respectively.

Interestingly, Bootz and Scrappy are described as a setter and a terrier instead of the Great Dane and Mutt they evolved into.[3]

Instead of a toy shelf or Supply Case, which would first appear in Catz before becoming a permanent element of the series, Toyz are represented by simple graphic icons in a white square (called the Toolbox).

In 1999, a Game Boy Color port of Dogz as well as a companion port of Catz was released.[2] The illustrations on the box art are taken from the Dogz II packaging.

Trading of Petz and Toyz can be accomplished with the Game Boy Color's infrared communication feature.[4]

The ports were critically panned, citing limited activities, dim graphics, static animations, and how unsuited the game play was for the Game Boy Color console.[2]

Dogz is a 16-bit game and will not run on modern computers without extensive prep work.

Serial codes are required to run the program and can be found online. 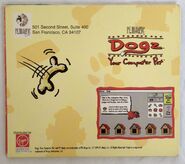 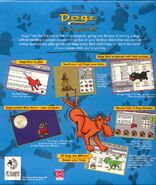 An advertisement for Dogz.

An advertisement for the Game Boy Color port.
Add a photo to this gallery

Retrieved from "https://petz.fandom.com/wiki/Dogz?oldid=6177"
Community content is available under CC-BY-SA unless otherwise noted.