Rather than adopting normal dogs and cats, the player cares for outlandish fictional creatures.

Like Dogz, Catz, and Petz II, Oddballz is limited to a single Playscene: the Playpen. The player can choose from a selection of 24 different wallpapers to decorate the room. Desktop mode is also a feature.

Instead of an Adoption Center, all 13 eggs containing each Oddballz species attach to the Toy Shelf, Oddballz's version of the Supply Case.

Oddballz age and grow each day the computer is opened, similar to Petz. It takes 90 days for an Oddballz to reach its full size.[2] Their life cycles begin at Just Hatched.

The case has a Flavorizer, a color dropper that can be changed on the case and then applied to Liqui-Food, Grubz, and Oddballz.

Oddballz features 13 various breeds for the player to interact with:

Each Oddballz reacts to Toyz differently.[3]

Some of the breeds are DLC. Got to find out which ones.

Oddballz never reached the heights of popularity or longevity that Petz did, but it had its own hexing scene, and some Petz sites had subsections for Oddballz.

Some still-standing Oddballz-heavy sites include:

While PF Magic never followed the game with any sequels or official additions besides some breeds, many of the animations used by Oddballz went on to be used in the Petz series, particularly for Catz.

Similar Clothes to Modvark's leopard-spotted pants, Grinnz's pink mohawk, and the glasses frames used by Jester and Modvark are available in Petz 3 and beyond.

A version of the game that uses DOSBox to run on modern computers with no setup can be downloaded from The Internet Archive.

The Mac version of the game. 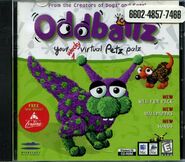 The Mac version, jewel case.
Add a photo to this gallery

Retrieved from "https://petz.fandom.com/wiki/Oddballz?oldid=5963"
Community content is available under CC-BY-SA unless otherwise noted.