Petz II is the second installment of the Petz series, released in 1997 for Windows 95 as two separate games, Catz II and Dogz II. It was developed and published by PF Magic and distributed by Mindscape.[1]

Petz II was a major graphical overhaul for the series and introduced many core game play components such as integration of Dogz II and Catz II and being able to adopt multiple Petz. It was also the first Petz game to feature online integration.

Here's what you get when you buy Dogz II:

Let's talk about it.

Each base game came with five breeds, updated versions of the ones from Catz and Dogz.

The Plush Cat and Plush Dog are similar in appearance to the real-world stuffed toys produced to promote Dogz and Catz.

26 wallpaper .bmps, which would later become standard for the Playpen in later games, were released as online content. The Web Fun Pack was first released as a Petz II download, as well as two Petz desktop themes for Microsoft Plus.[3]

Gotta find out how to make "see also" links.

Small bean bag toys called "Fuzzy Beanz," produced by Trendmasters, were packaged with some copies of the games. They came in two varieties, a Mutt and a Persian. 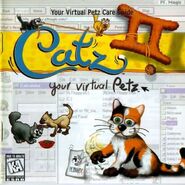 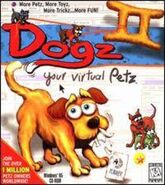 Add a photo to this gallery

Retrieved from "https://petz.fandom.com/wiki/Petz_II?oldid=6179"
Community content is available under CC-BY-SA unless otherwise noted.